By Practical Frog
I have a few chooks, that obviously eat grain. I usually go into the pen and do the storybook thing and sprinkle grain about the pen. My theory was that they had to hunt  throughout the pen for their food - a more natural way for them to get their food. Over the last few months I have noticed that I have a flock of pigeons that spend a lot of time in the pen with the chickens hunting around the pen for the grain that I so gaily scatter everywhere.


So I thought I'd flummox them pigeons. I put the grain in piles around the pen in places that I just knew they wouldn't go. As it turns out - I know diddly squat about what a pigeon will and will not do. They were quite happy to feast at the pile rather than hunt for the grain as it it turns out.


What to do? I thought about one of those fancy bird feeder things and decided that I wasn't going to get a plastic one. They are cheap but with my experience with plastics in the Queensland sun, I thought it would bake and then fall apart. So I decided that a galvanised metal one was they way to go. 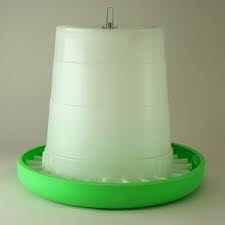 And then I looked at the price and decided that even the tiny ones would have to stay on the shelf.

So I turned to my friend Google and discovered that other intrepid souls had been where I wanted to go and that it was possible to make chicken feeder at home with "found ingredients" - that's my kind of project! 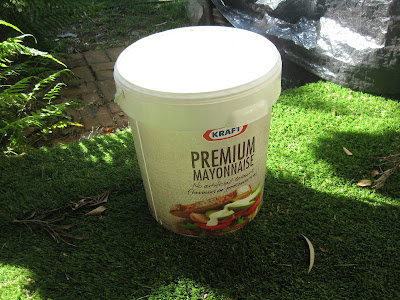 First you need a bucket with a lid - this is one I got from work but you can buy sturdy buckets with lids from Bunnings and the like. Don't forget to wash it out if you are repurposing your bucket (before you drill the holes - just a tip for the well prepared!)

Then you will need a base. I found a plant saucer that was bigger than the base of the bucket. 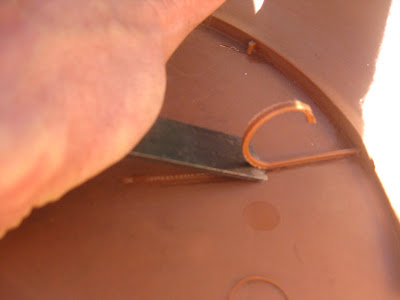 The husband decided that it would all go together a lot better if we got rid of the ridges on the saucer - so he used a hammer and chisel to get them off and make it smooth. 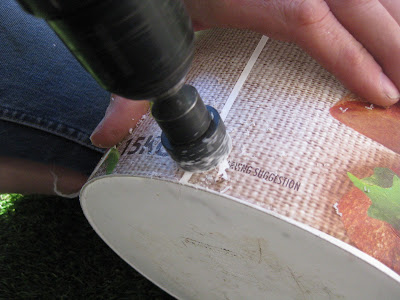 The he used a "mouse hole" drill to cut the holes for the grain at the base of the bucket. 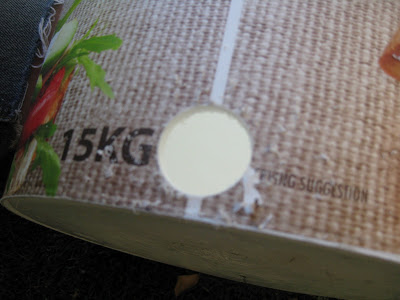 Here are the four holes evenly spaced around the bottom of the bucket. 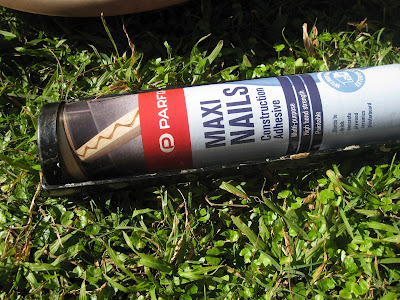 Then with a tube of that "No More Nails" type stuff,

We stuck the two parts together. 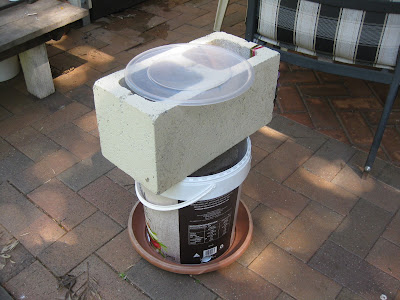 An then put a weight on it and waited till the afternoon to make sure it had well and truly set. 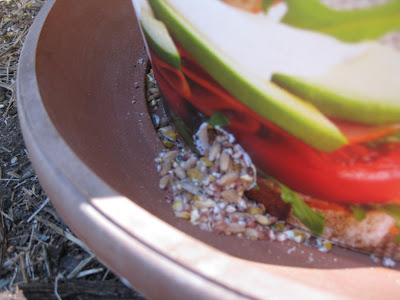 Then I filled it 1/2 way with grain - and voila - grain comes out of the hole and into the saucer. 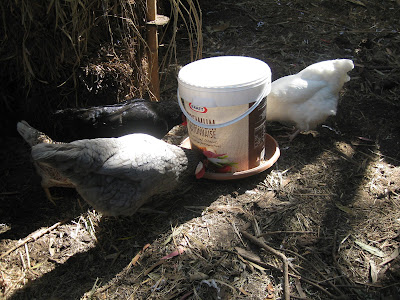 It didnt take the chookies long to work out how to get it to work!!!


I did use plastic in the end because it was free and this seems to be a much more robust plastic than whatever they make make the chook feeders out of. I wont feel too bad about having to throw this out when it all finally falls apart as all the parts have had a second or third life already.

This bucket also has a handle. The grand master plan is to hang the feeder up making it even harder for the pigeons to get at the grain. I think they will just sit on the ground and put their wee beaks into the saucer and munch away if I don't I suspect. It will probably take the chookies a while to get used to the new feeding regime but I will still have scraps to throw around the pen for them to hunt and scratch for - they just happen to be things that pigeons don't seem to want to eat!

We have been considering a modification whereby we put a "cone shaped" something on the inside of the bucket so that the grain falls towards the edge as they peck through the holes.

I'm also hoping this will cut down on my grain bill and keep the other birds (and maybe rodents) away from the grain leaving more for the chookies to grow big and lay lots of eggs with!!

Score card:
Green-ness: 4/5 for keeping wild birds away from an artificial food supply
Frugal-ness: 5/5 for not spending a cent and still getting what we needed!
Time cost: about 1/2 hour to collect up the bits and clean, drill and glue. 6 hours setting time and another 10 minutes setting it up in the pen and getting organised
Skill level: Power tool skill level - might be able to do it without if your bucket isn't tooooo robust
Fun -ness: I think the chookies had more fun than I did!

Angela Schofield said…
Share great information about your blog , That’s what I was looking for. I am talking about all topics bundled in this blog. Blog really helpful for me. Thanks for share your blog here.
BBQ cleaning Southern Suburbs
End of lease cleaning Sydney Olympic Park
10 June 2020 at 14:46

Popular posts from this blog

What to do when your cat attacks a bird... and doesn't kill it.

By Practical Frog
We have an eight year old cat who we got as a stray about six years ago. The vet reckoned she was about two when we got her and we did all the right things and got her spayed and vaccinated and all that stuff. She loves people and no matter where you are in the house or garden, she will not be far away. She really good with kids and will put up with the squishiest cuddles and a far bit of toddler tail fascination before bolting out the door to escape. She is well fed (despite the look she is giving me and the empty bowl below...) but not fat - but still the  urge to hunt and subsequently kill still seems to be quite strong. Last weekend, she pounced out of nowhere on a rainbow lorrikeet - thankfully my husband and a band of teenage boys were also there and managed to grab the bird before the cat had done more than pounce. Now we have a slightly mangled still alive but obviously unwell bird on our hands - what do you do? Here's what we did... We found a box - popped an old
17 comments
Read more here!

By Practical Frog
Like most households, milk crates appear in and about our house as they are the right size to sit on, strong enough to stand on and the right shape to store things in. They are usually free or picked up for a dollar or two at garage sales or at dump/tip shops. They come in red and blue in our area (depending on weather they are originally from Paul's or Dairy Farmers!) and that simply doesn't go with my outdoor decor - neither does the plastic look but that's another issue. Something had to be done. I decided to cover them with material that fitted in with the rest of our current outdoor setting - A quick look on the Internet for inspiration and confidence and... The finished product being modelled by the cat! Here's what I did... I started with the standard Brissy Blue and Red Milk Crates... Then I bought a sheet and a couple of pillow cases from the local Footprints Op Shop This is less a pattern and more a method to follow - Cut the sheet i
5 comments
Read more here!

By Practical Frog
We live in Queensland. We have cockroaches. Lots of cockroaches! Why the NSW rugby team is called the Cockroaches is a mystery to me - surely ours are not only bigger but more plentiful??? At any rate, I don't like living with them (and I'm quite sure they  are not so fond of me at the moment!!) and I have been going through the usual gauntlet of sprays, solutions and bombs to get rid of them... But I'm not so keen on the chemical aspect of all this spraying and bombing. I hate the smell and can almost feel disease and cancer growing in me every time I spray. I'm OK with the resident cockies getting a lungful of chemicals and then keeling over but I feel its impolite (and probably illegal) if my guests and family members do the same thing!!! We went through a faze of killing them by hand (and flyswatter and rolled up newspaper and underfoot) but its hard and frustrating work and it probably was only culling the dumb and slow ones - leaving the smart fast ones to bre
92 comments
Read more here! 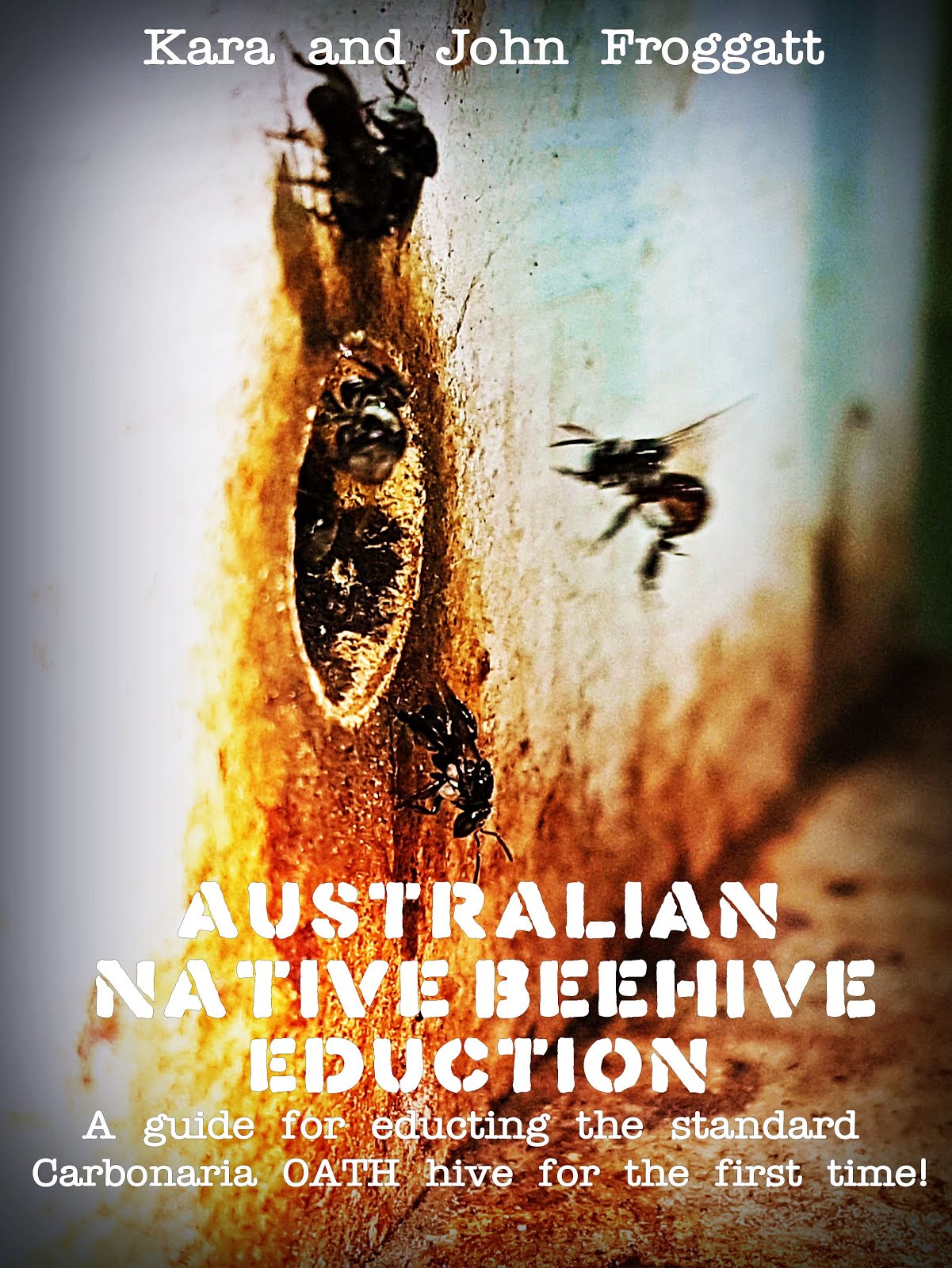 You have an Australian native bee hive and you're keen to add another one to your backyard but don't like the splitting method because of all the bees that get hurt or killed? Then this is the hive duplication method for you! Our 30 page instant downloadable booklet gives you step by step instructions and photos of how to set up and create a new hive - fatality free! It has lots of great images, lots of information including when to remove your eduction, what to do to prevent predators and other trouble shooting hints and tips. Written by Brisbane based backyard native bee keepers, this booklet is like having a friend alongside helping you make decisions every step of the way. It makes a great gift for the native bee keeper in your life or those "impossible to buy for" gardening relatives who love their birds and bugs! 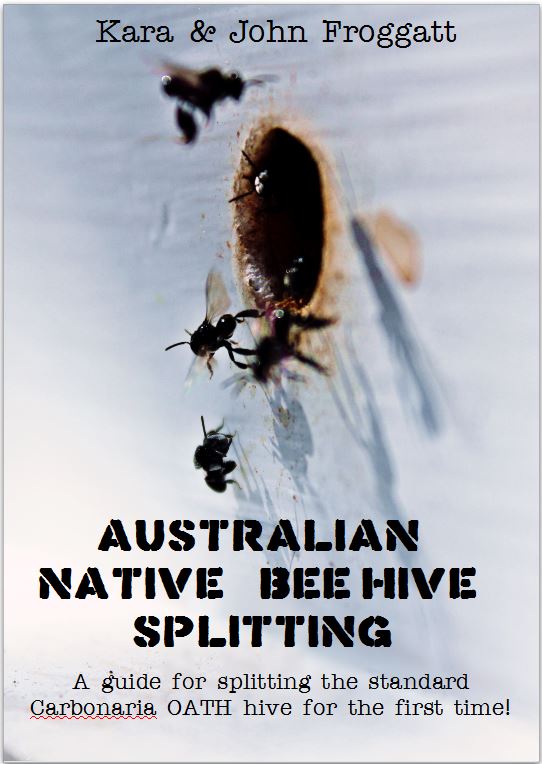 
This 30 page booklet will run you through the 5 steps to successfully splitting your Native Australian Carbonaria hive.
With a section devoted to trouble shooting and FAQ's there is enough information for you to feel confidant about what to prepare, what to expect and what to do when things don't go to planned.
Written by native bee lovers and illustrated with full colour photos, this guide is intended to help you get through that first split and on your way to successful hive propagation in years to come.

Now available as an instant download from SendOwl at AUD $5 payable with PayPal.

What other have been looking at... 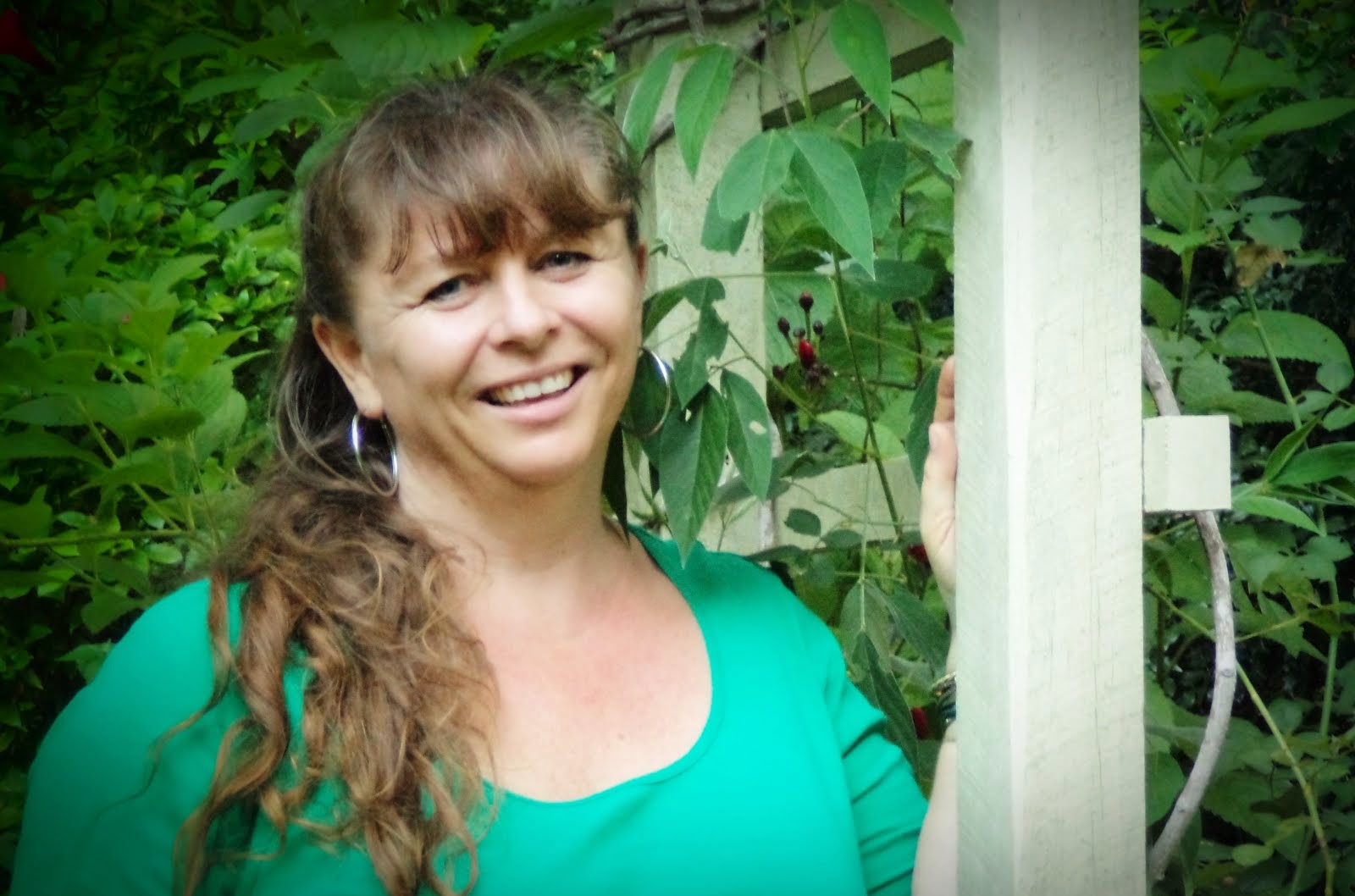 This blog contains affiliate and referral links which may reward me in the event of a subscription or sale. I use these funds to feed my chickens! Thanks for the chook food! :)

© The Practical Frog Blog 2011 - 2018.
Unauthorized use and/or duplication of this material without express and written permission from this site’s author and/or owner is strictly prohibited. Excerpts and links may be used, provided that full and clear credit is given to Kara at The Practical Frog Blog with appropriate and specific direction to the original content.